Mystical Experiences, Orbs, Apparitions and Me 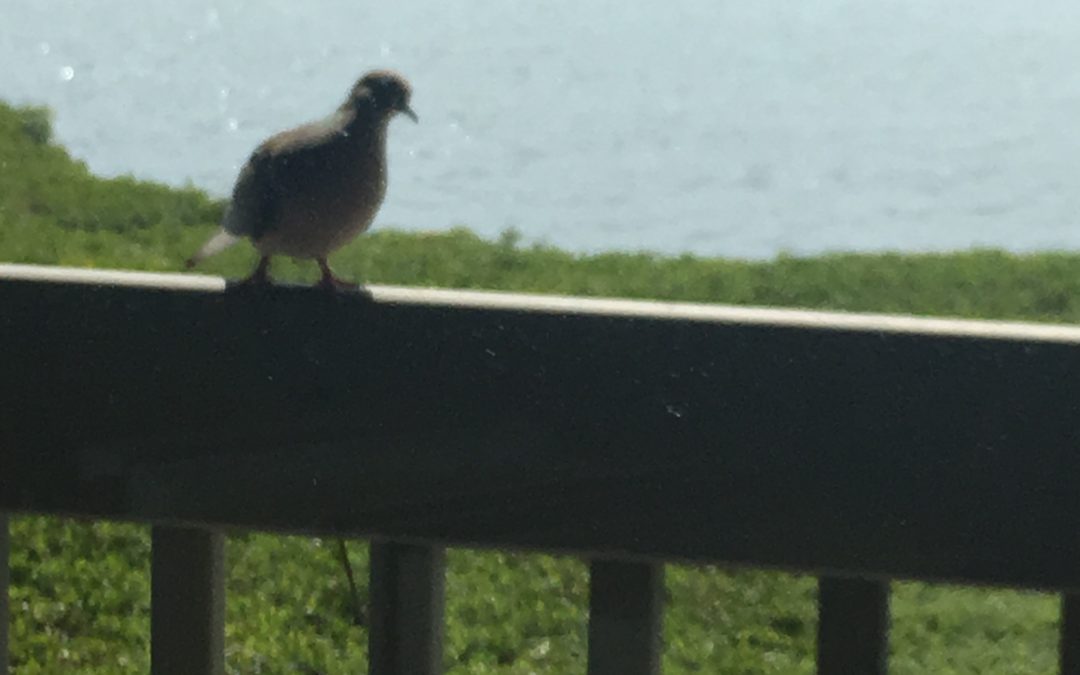 The dove pictured here showed up on the deck outside my office and lingered for such a long time I couldn’t help but wonder if there was a spiritual message involved with his/her appearance. Dutifully, I googled the symbolism for this creature. The consensus among various authors was that they equated doves with heavenly visitations.

Human spiritual experiences have captivated me for a long time. My curiosity about this topic was further aroused by Dr. Wayne Dyer’s mention of “orbs” appearing next to him in pictures he published in his book, Wishes Fulfilled. They are fascinating.

I read further about these “orbs” from Klaus and Gundi Heineman in their book, Orbs-Their Mission and Messages of Hope. The book contains sixty-five pictures showing a variety of orbs along with the Heineman’s explanation

These are both interesting books, I highly recommend them. Imagine, with no special equipment, other than a camera with a flash, people took the pictures and these orbs appeared. For the Heinemans, these apparitions happen so frequently, they use them to confirm their choices, no matter how small, such as what hotel to stay in during a vacation.

Reading about orbs as spiritual guides led me to other books and articles from people who had experienced mystical occurrences. It is amazing what is out there, from out-of-body experiences to another dimension, to apparitions of angels or glowing figures who speak to them.

Like most mere mortals, I am not blessed with mystical beings who appear and lead me on the way to my enlightenment. this was never more apparent than when I tried taking pictures around my home, office, etc. to see if I could catch an orb, but so far, I just have a lot of shitty pictures of inane things and rooms.

Messages from the spirit world

I believe the spirit world reaches out to us, but it is not the same for all. It seems life would be easier if a burning bush told me what I needed to do or an orb to confirm a decision I have to make, but no such luck.

From the books I have read, people who experience apparitions—eventually—follow the direction given, for their lives wallowed in misery and shallows until they heeded the call. Some of them left marriages and families, while others moved to another state or country and started a new mission. Then there are those who left successful careers to pursue something they knew nothing about.

These stories freak me out, which makes me wonder if the reason I don’t get these types of spiritual directions is because I could handle the message. For example, having grown up poor, I would have trouble accepting a direction that would compromise my financial security. The truth is that I don’t think I would recognize a mystical message if I saw one, chances are that if I saw a burning bush appear, I would try to drown it with a fire extinguisher.

The Universe only gives us what we can handle

I am convinced the Universe asks of us only what we can manage, therefore there is good reason it has not communicated with me in any obvious mystical ways. That doesn’t mean it can’t happen in the future.

The guidance I get is from this little voice within me. I call it my “little peanut” (No, I never took a picture of myself and saw a cashew near my heart, the nut reference is just my term of endearment). My little peanut doesn’t say much, but it is always important. It tells me to relax, have fun and play. It inspires me with topics to write about. The little peanut whispers reminders to support and love those around me who need it. Most importantly, this little voice tells me I am good enough and worthy of love when life circumstances trigger my self-doubt and fears.

I used to ignore my little peanut in favor of the opinions and approval of others. I am glad I don’t do this anymore. My life improved considerably when I began paying attention to this inner guidance.

As for the dove

Here is some serendipity for you, just as I began writing this section of the blog, a dove reappeared on my balcony. I am not sure it is the same dove, for this one seems smaller, but it certainly is getting my attention. It presence reaffirms what I have read about the spiritual meaning for doves appearing in our ives.

Although the general consensus from the myriad of authors I sought out is that “these birds are known as the symbol of love and maternal nurturing”, this does not resonate with me so much right now. However, the message that spoke to me the most is as follows,

“The dove represents peace of the deepest kind. It soothes and quiets our troubled thoughts, enabling us to find renewal in the silence of our minds.”

Let this be today’s message for all of us as we endeavor to live more fulfilling lives.

Photo by Guillermo Vidal of the first dove!