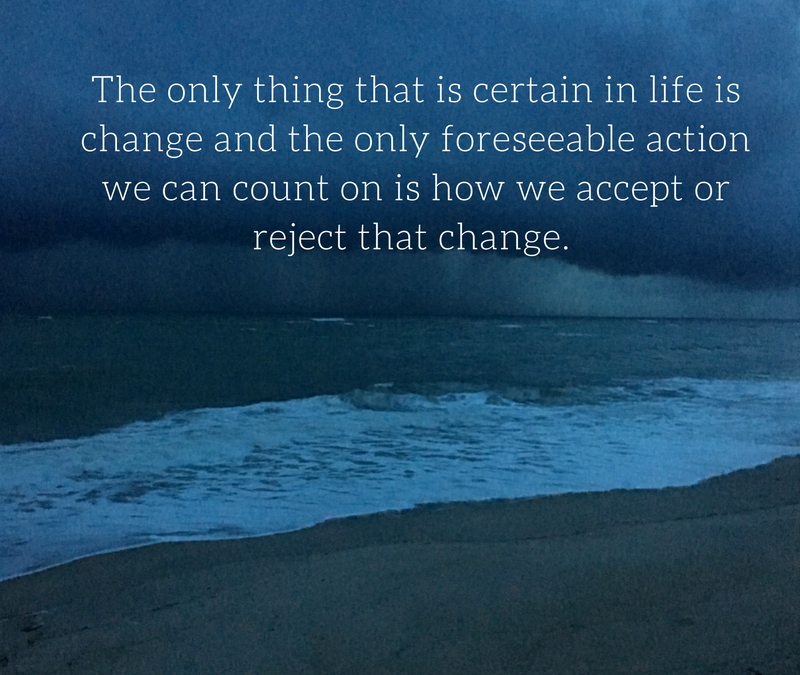 No matter how you perceive the results of this last presidential election, one thing is certain; President Elect Trump’s ascension to power will bring about a monumental change to our United States and probably, the world.

The quirky thing about change, whether one considers the nature of what catalyzed it to be good or bad, is that it can become the source of immense stress. I call this phenomenon the “What do we do now syndrome”.

Altering life changes of this magnitude can remove the old familiar support structures.  They often reveal and then evaporate the old perceptions of reality that we had once adopted. Whether we liked those perceptions or not, even if they had become stale and lackluster, they have ruled our lives with a certain and predictable routine. We may have hoped for change, but we had stopped ruminating about new possibilities because we never believed the status quo would actually ever change. For these reasons, this kind of event can leave us feeling uncertain about the future and make us feel like we are travelling without an emotional map and will soon be lost. In the end, we are left to worriedly ponder whether or not the change will make our lives better or worse.

There is really no way of knowing what our future holds, the real truth has always been that, in spite of all of the predictable models we put in place to bring security to our lives, our existence is by its very nature unpredictable. The only thing that is certain in life is change and the only foreseeable action we can count on is how we accept or reject that change.

It is understandable to feel apprehensive about how to move forward in the midst of the unfamiliar but, if we will allow it, our spirit will summon another alternative. If we can acknowledge our fear of the unknown but look past it, we can be free to explore inexhaustible new possibilities, for we are no longer bound by the constraints and limitations of our old life.

Events like what just happened in our Presidential election can be the catalyst for positive change within us and for our country. Shattering the old container of our reality has set us free to open our hearts and minds to that creative intelligence that is a part of us all. This will allow new voices an opportunity to be heard and lets a new passion enter into our hearts. Whether it is to declare opposition or support, or we discover a heart felt advocacy for a new program, or we attempt to improve the life of the voiceless sector of our society, this is a real chance to let our souls soar freely.

My own personal experiences backup my perspective. In the late 1990’s I was head of the Colorado Department of Transportation and a member of Democratic Governor Roy Romer’s cabinet. Romer was term limited and the election to replace him became a catalyst for change when Coloradans chose Republican Bill Owens to head the state.

I was distraught by this result, for it was my nightmare scenario. From one day to the next I went from being the head of a department to being unemployed. Adding to my discomfort was my belief that the fate of my beloved Colorado was in grave danger, for I was sure the new Governor would undo the direction we had worked for so hard during Romer’s twelve year term in office.

As I look back, this event that seemed so terrible for me at the time actually turned out to be one of my life’s greatest blessings. For as painful as it was to be removed from my job in the department, I was able to restructure my life in a more positive way. After having been reluctantly set free from my old model, I was able to recreate my self and my career by incorporating talents I had not been required to use in my old setting. I was introduced to new and valuable ideas and perspectives. I was exposed to wonderful experiences that I now consider some of the most joyous ones in my life. I became a better person and a more inspired public servant. Imagine, a mere twelve years after one of the most tumultuous times in my life I became mayor of Denver. All of this was made possible by that life altering change that I believed was so terrible.

As for Colorado’s fate, Governor Bill Owens was a pretty good governor who continued to build the state’s wonderful legacy. Today Colorado is as vibrant as ever and it’s future looks incredibly bright.

Out of all of these experiences, I have discovered  that it is a mistaken notion to judge life-altering changes as either good or evil. It is more appropriate to acknowledge that what happens is serving a higher purpose that will aid every one of us on this planet to evolve into our truest selves.

I woke up to witness dawn this morning and I was reminded that the profoundest depth of darkness is never powerful enough to prevent the coming light. Darkness and light are the yin and yang of our souls and they are forever tied together, for one cannot exist without the other. Regardless of what we may think about the affairs of humans, it is important to remember that the universe will never stop providing, nurturing and encouraging our evolution and that of all incarnate beings to create a greater good.