Will Building a Wall Reform our Immigration System? 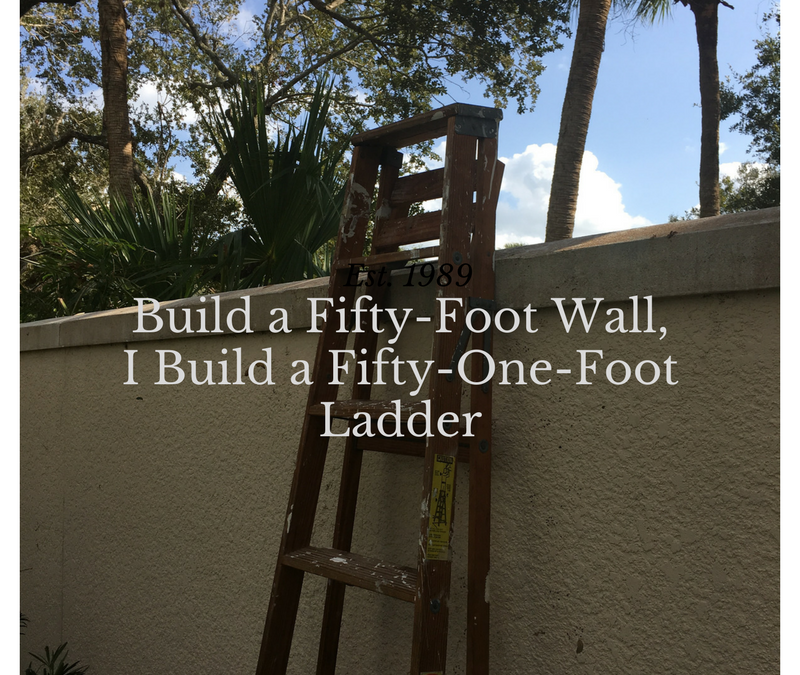 Now that President Trump has officially taken his oath of office, there are many who are hopeful he will follow through on his promise to build a “Wall” on our southern border. Sadly, other than this particular strategy, you don’t hear much more about immigration reform these days.

Perhaps we are all pinning our hopes on this wall to be the main solution to our illegal immigration problem, but, if that is the case, that means we are not taking into consideration the power of “where there is a will there is a way.” Human history has shown us that desperation, whether triggered by political persecution, war or unlivable poverty, can fuel in a normal human being an unconquerable will to survive. Wether by building ladders or tunnels, people will find a way.

Perhaps the building of the wall is simply a symbol to us that emphasizes the fact that we don’t want outsiders to have free reign to enter into our country willy-nilly. However, if it was just a symbol, we would also be talking about other solutions needed to resolve this problem, but we are not.

In any event, let’s examine this concept of building a wall on the southern border.

The US/Mexico border is 1954 miles long. Already about a third of this distance has various types of walls, although, most were built to stop vehicles and not humans from crossing. Assuming we ignore the environmental and property rights issues, the estimated cost for the wall range somewhere between $20 to $40 billion dollars. What is also true is that American Border Patrol staffing has grown from 11,264 in 2005 to 20,273 in 2015. Would we need to grow this human asset? What would be the cost of that increase?

It is hard to get arms around the purpose for this “Wall”. Statistics show that forty-five percent of immigrants who are residing illegally in the USA got to this country by legal means. No “Wall” will stop them. In addition, since the recession of 2007-09, more Mexicans have returned to Mexico than have come to the United States, which begs the question; is the wall meant to keep others out, or keep us in? Maybe the Mexican government would be willing to pay for the “Wall” in order to keep Americans out of their country.

I am a proud American citizen and a Cuban immigrant who arrived from Cuba in 1961. Everything that I am, that I have and that I have ever achieved happened because a door of opportunity was opened to me the day I arrived in this great country.

In many ways my story represents the best of the United States. Fifty-five years ago I arrived in this country parentless and was sent to an orphanage in Pueblo, Colorado. Today I am grateful for having lived a life of hope and opportunity. I could never have imagined during those early days in the orphanage that one day I would become the mayor of Denver. We should be proud of the fact that in America a person can go from being an orphan to becoming a mayor or, perhaps, even greater.

My story also epitomizes the positive contributions that immigrants can make to this country when they can live out of the shadows. For this reason, it bothers me that we can’t seem to get all the great minds together in this country to draft a solution. This is sad, unfortunate and unnecessary because, when you take all the emotional and fear mongering rhetoric out of the equation, immigration reform is simply a problem waiting to be solved.

I still believe in that same United States that offered me a brighter future when there did not seem to be one for me. It can still do the same for the many, like me, who are eager to contribute to the success of their communities if given a chance.

I get why people so roundly supported President Trump’s proposal for the wall. The years of indecisiveness and lack of action on comprehensive immigration reform has resulted in a dysfunctional system. Unfortunately, this state of affairs has confiscated the respect we once held for immigrants and replaced it with a fear and ignorance that has dehumanized immigrants to the point that they are looked down upon as human throwaways.

We all know that America was built by immigrants. They came escaping the desperation of poverty, or absconding from oppressive regimes that violated their human rights. They chose a new destiny after seeing that beacon of light and hope called the United States of America. Our history is witness to the overwhelming majority of those who contributed to their adopted country’s success with an indomitable work ethic and an irrepressible dedication to family and community.

Whether Republican, Democrat, Independent, etc., we must encourage our leaders to solve this thorny problem. I believe that fixing our immigration system will contribute to the greater good of our country. Admittedly, there will never be perfect policy that will satisfy every nuance from all sides. Most of us will have to hold our noses on some of the aspects of a solution, but we must try to bring this issue out of the shadows into the light.

We need a good influx of immigrants into our country. So let’s get our heads together and fix this problem. And, in so doing, let’s be guided by our humanitarian roots. Let’s also recognize that we need a growing labor force and, with declining growth rates, that can only be provided through immigration. Imagine what would happen to our economy without them. Imagine what would happen to our industries, such as agriculture, day care, senior care and construction without this workforce. Imagine the many potential future teachers, engineers, doctors and lawyers that we may loose if so many top students are deported.

Last but not least, let’s no longer tolerate what many immigrants must today endure; living in the shadows in fear of being deported or separated from their families, having their wages stolen by a deceitful employer, or having no legal recourse when crimes are committed against them.

We have it in us to resolve this turmoil, but a wall alone is not an answer, we need a more comprehensive plan. Let’s remind the world of that greater America that is the shining beacon of freedom and justice.